The breed of the Criollo horse in Italy

Italy is probably the country in Europe where most Criollos are, due to an important sea shipping traffic between Uruguay, Argentina and Italy. Indeed, during almost thirty years, an important Italian horse business man from the region of Piemonte (North Italy) used sea shipping to import in Italy horses from Uruguay and Argentina. Each ship used to bring around 1400 horses, including a great number of pure breed Criollos but mainly horses “mestizos”, to sell them as riding horses or as slaughter horses. The most beautiful purebred Criollos made possible the development of the first breeds in Italy and Germany.

If this business contributed to the introduction of the Criollo horse in Europe, it also forested the introduction of a huge number of “mestizos”, commonly named “Argentinian Horses” and many times, improperly called “criollos” that, even if they were most of the time excellent riding horses and/or working cow horses, had neither an official pedigree, nor a morphology similar to the purebred Criollo’s morphology.

In 2010, the horse sea shipping was interrupted and prohibited for administrative and economic reasons. However, a lot of Italian people are still remembering with some nostalgia this period because the unloading of so many horses used to be a real show that encouraged the diffusion and the love of the Gaucho Culture in Italy.

If today it is almost impossible to determine the exact number of Criollo horses living in Italy because most of them belong to individual owners, some of these owners willing to develop in a more structured and organized way the development and the promotion of the breed in Italy founded the Italian Criollos Breeding Association decided in 2007: “Associazione Nazionale Allevatori Cavallo Criollo” (ANACC).

Italy has today 10 breeders officially registered and members of the ANACC. Those breeds are quite small with an average of 1 to two broodmares per breed. However, in 2015, the ANACC registered two new breeders with more than three broodmares.

The ANACC was founded in 2007 by Eugenio De Flores and Laura Campiglio and used to have in its Administrative Board a mix of breeders and Criollo aficionados. In 2013, new elections of the Board were organized and since this year the Administrative Board counts 5 breeders only with a President, Mr. Denis Lanzanova. This change appeared to be necessary in order to give to the breeders, which include owners of stallions and/or broodmares, a central role in the development of the association and the promotion of the Criollo in Italy.

Today there are 40 members in the ANACC including the 10 breeders. The ANACC has an open system of membership. This means that to be part of the ANACC it is sufficient with being a Criollo lover and paying an annual fee. 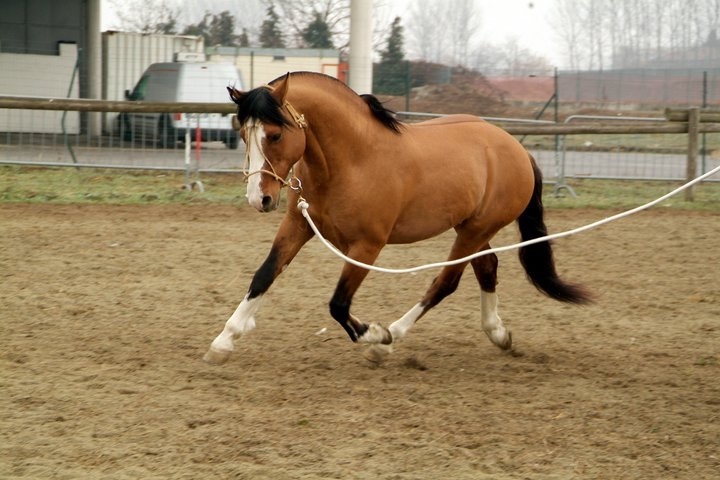 One of the ANACC’s goal is to promote in Italy the Criollo which supposes to urgently fight against some popular common believes coming from the Horse Sea Shipping Period pursuant to which an “Argentinian Horse” is a Criollo. As a consequence, the ANACC is curtly trying to explain to people interested in Criollos that a Criollo is a purebred horse, the product of a natural and human selection undertaken more than a century ago, with a very determined morphology and character, registered in official breeding registries.

The ANACC is also willing to create a book registering all the Criollos living in Italy.

The ANACC organizes some events to promote the Criollo breed. The main event organized by the ANACC takes place during the Fiera Cavalli in Verona at the beginning of November, since 2008 (except 2013 where the ANACC had no representation during the Fiera). During this very big show, the ANACC offers different animations and shows like a Flags Show, a European Morphology Competition with judges coming from Uruguay and Argentina, and disposes of stables and a desk to welcome visitors. 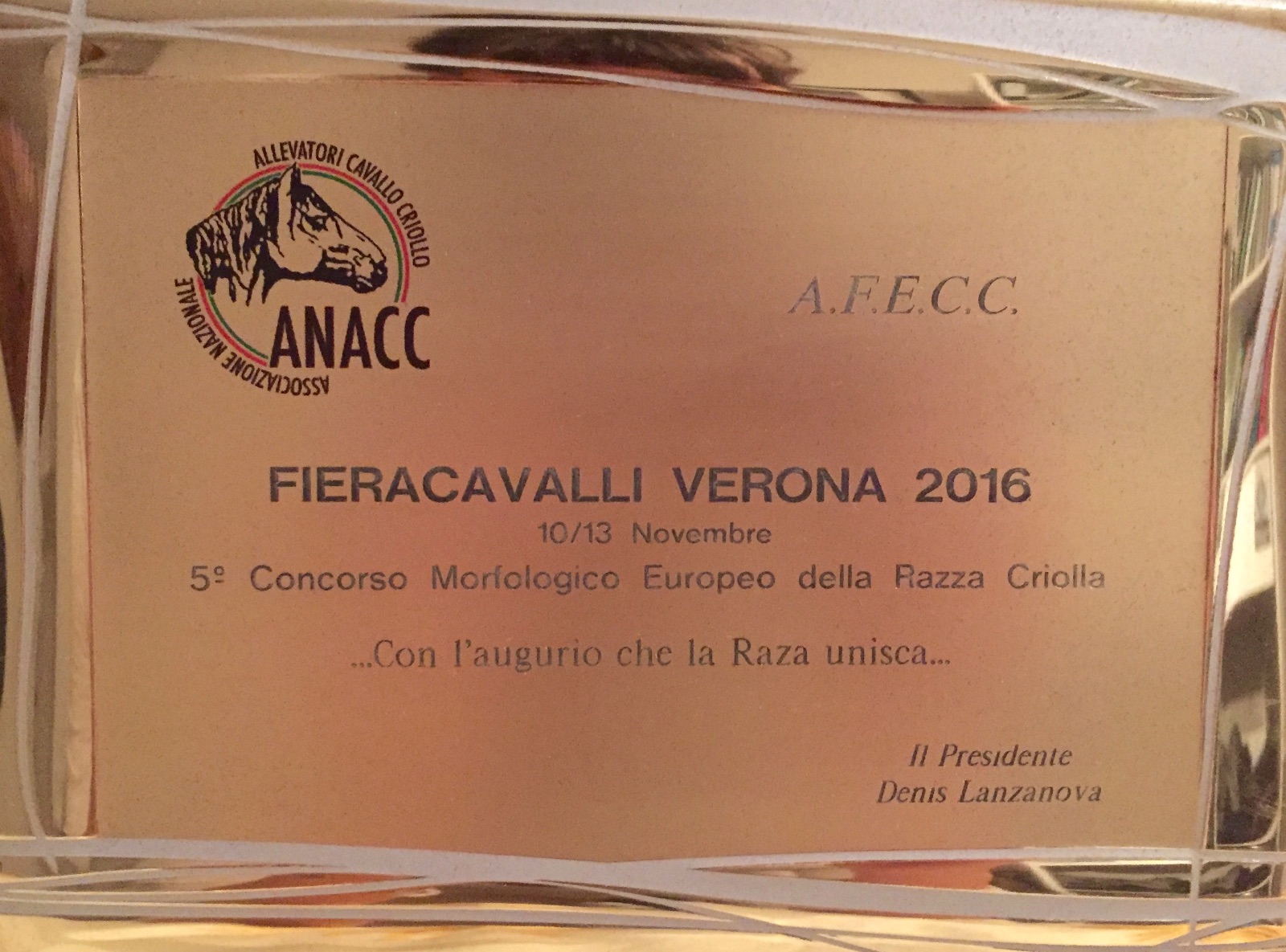 The ANACC also organizes courses called “Morphology Courses” where participants have the opportunity to know more on the Criollo morphology. Those courses are generally conducted in March, June and November, during the Fiera Cavalli. In 2015, in Verona, the Morphology Course was given by Martin Gurmendez from the Uruguayan Association SCCCU with more than 40 people attending. 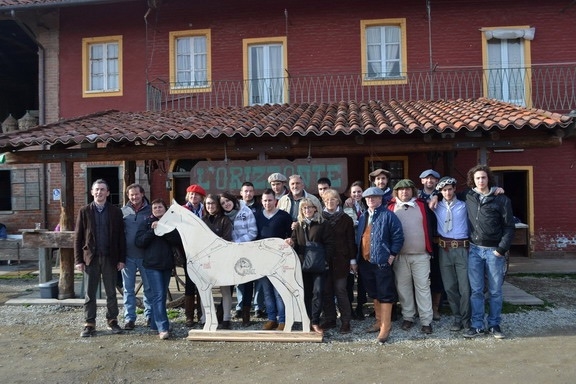 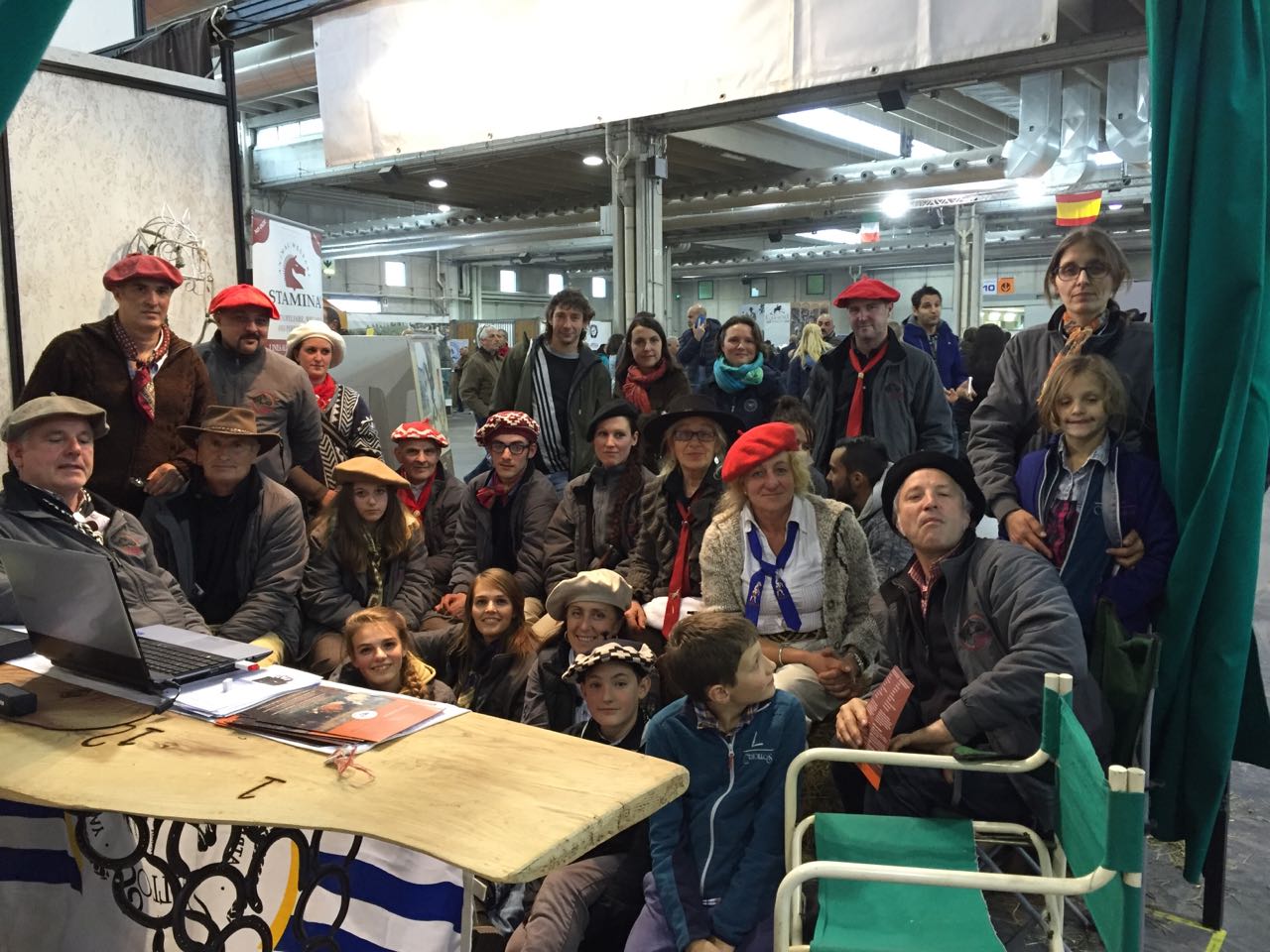 Apart of these main events, the ANACC organizes many friendly meetings to allow members to enjoy the familiar atmosphere of the association. 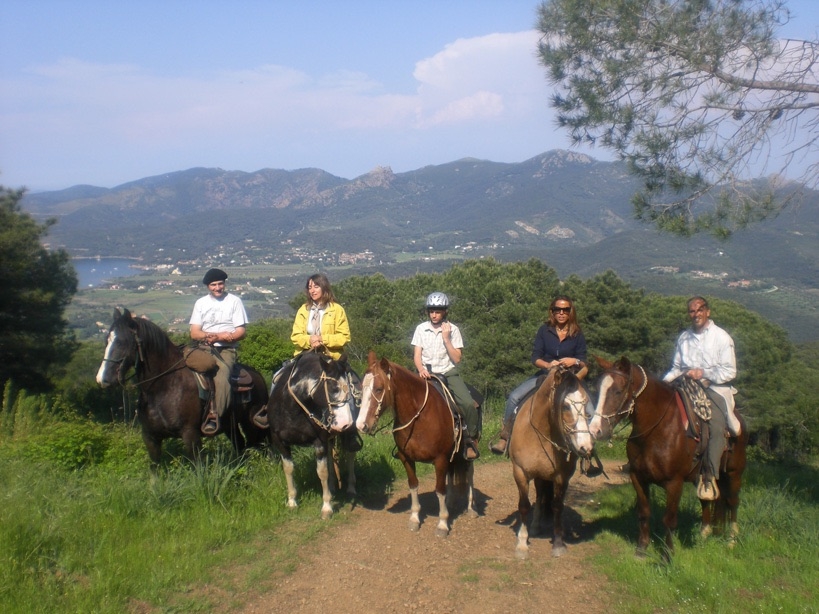 For more information you can visit the ANACC’s website www.anacc.it (The new version is avalaible since March 21, 2016!). You may also directly write to: This email address is being protected from spambots. You need JavaScript enabled to view it.
If you want to be aware of all the events organized by ANACC in the 2017 please have a look on section News/Agenda of www.criollo-horse.com !!!

The registry of Criollo foals in Italy is working for the moment like in France, with the difference that most of the horses in Italy are registered in the Uruguayan Registry (managed by the ARU) due to the closed relations existing between Italy and the Uruguayan Association, the SCCCU, for many years. Breeders usually send, through the ANACC, all the information regarding the foal to be registered in Uruguay in order to obtain an official pedigree after previous approbation by an official Uruguayan agent from the SCCCU, coming every year in Italy and Europe to visit the breeders.

The use of Criollos in Italy

Most of Criollos owners use their horses for pleasure and trails.

However, in Italy western riding is quite famous, and in particular Reining. There are many trainers and some of them are getting more and more interested in training Criollos. Few Criollos started to participate to national competitions. In Working Cow Horse, the trainer and rider Giovani Campanaro participated to the 2015 Americana Show in Germany with a Criollo stallion named Fogo de Chao do Capao Redondo owned by Vitorio Raboni. Vitorio Raboni also owned a stallion for reproduction with Brazilian bloodlines as well, names Loco de Bueno Mapocho that became finalist of the 2013 Open Derby Reining in Oklahoma in the US. 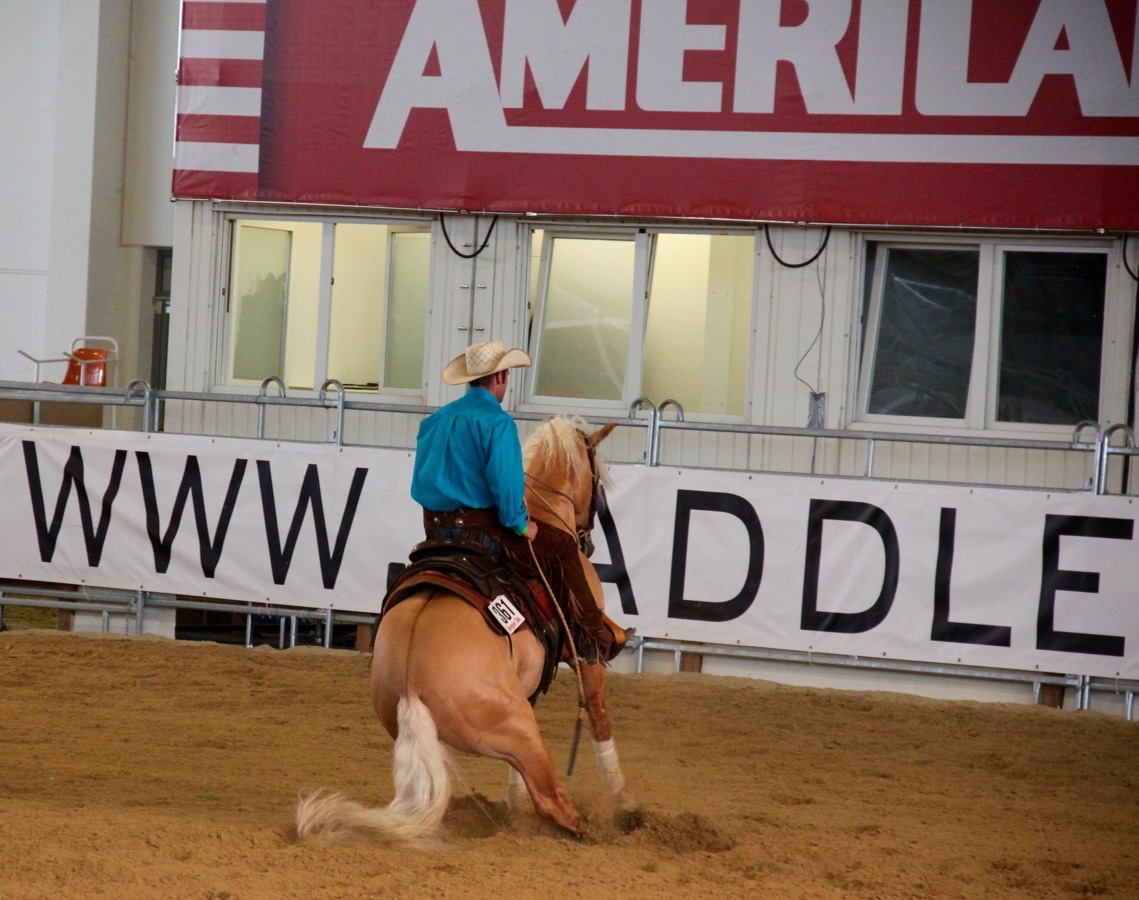 The ANACC recently put online a registry of the breeders of criollo horses in Italy, available at this page: www.anacc.it/team/i_nostri_cavalli.html

In Italy, you will find the following breeders:
A registry of the criollo horses was also acheived in Italy by Miceli and is available at this page : https://issuu.com/italiacriollos/docs/1_copertina_merged34

15/11/2018
This year, around 30 horses travelled from Italy, Germany and Switzerland to compete for this VII European Morphology Competition of...

ITALY- New Board and New President

Photos of the ANACC's participation to the 2017 Fiera Cavalli !

11/11/2017
This year, The ANACC had could enjoy the presence of the profesional Brasilian photografer, Fagner Almeida, to make a nice...